Peach cobbler is one of summer’s beloved desserts, and now you can enjoy it even more knowing you don’t have to heat up your kitchen to make it. We’ve been gobbling up this summer’s peaches by the pound, mostly sliced up and served just as they are— is there anything better? I also love baking with peaches, but it’s been so hot I haven’t wanted to turn on my oven any more than necessary. Then I remembered that I could make my slow cooker do all the dirty work without heating up my kitchen.

Slow cookers aren’t just for the winter months, you know. Cobblers cooked in the slow cooker aren’t the prettiest dessert, I admit. They’re a little mushy looking and the topping doesn’t really brown, but don’t be fooled. What they lack in appearance they more than make up for in flavor and ease.

Get this recipe started in the afternoon, forget about it for a few hours, and it will be hot and ready just in time for dessert! Be sure you don’t forget the ice cream. 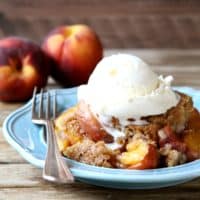