Packed with chunks of crisp apples, applesauce, and lots of cinnamon these scones are perfect for fall! It’s true, I was sad to see summer go. But it’s also true that October is one of my favorite months of the year. The leaves are changing, the cold hasn’t quite set in yet, and fresh summer produce transitions to the bounty of fall.

A few weeks ago I bought a box of gala apples from my favorite roadside stand, and we’re still enjoying them. My boys are each eating several a day, I made a big batch of applesauce, and I’ve been baking yummy things like apple crisp and pie.

One morning last week I had a hankering for scones, and 30 minutes later these scones were born. The recipe for the scones is adapted from King Arthur Flour and they’re absolutely bursting with apple flavor. There’s both chunks of fresh apples and applesauce baked in, along with a spoonful of cinnamon.

You can bake the scones and serve them as is, or you can either sprinkle a little cinnamon-sugar on top before popping them into the oven, or top the baked scones with a simple cinnamon glaze. Or, you can be like me and do both!

baking tip:What's the difference between biscuits and scones

While scones and biscuits have many similarities and the line between the two is somewhat blurred, there are a few differences I have noticed.

Scones are typically richer, often made with eggs and/or heavy cream. And because of the extra liquid in the dough, scones can be denser and more cake-like, while biscuits are known for being soft and flaky. Both can be either sweet or savory, though biscuits are most known for being savory while scones are sweet. 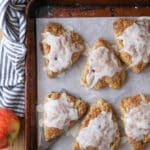 Seasonal produce is so great right now! Some of my blogging friends and I are taking on the challenge to eat seasonally. Check out what’s in season this month and join us, won’t you?

Curried Cauliflower Quinoa and Lentil Salad by Food for My Family